The Glacier Express connects St Moritz to Zermatt, two major mountain resorts located near the Piz Bernina and the Matterhorn respectively. It is an 8-hour journey in a narrow gauge railway, which goes through 291 bridges and 91 tunnels across the Oberalp Pass reaching its highest point at 2,033 m altitude.  Jointly operated by the Matterhorn Gottard Bahn(MGB) and Rhaetian Railway(RhB) it passes along the Albula/Bernina area between St Moritz and Thusis which were added to the Unesco World Heritage Sites in 2008.


Its first operation under the actual name was made in 25 June 1930 between three railway companies, Brig-Visp-Zermatt Bahn, Furka-Oberalp Bahn and RhB, and until 1982 the Glacier Express only operated in the summer months, because in the winter the Furka Pass, a mountain pass between Andermatt in the Canton of Uri and Gletsch in the Canton of Valais, was covered in snow and rendered impassable. That changed in the 25th of June the same year, with the opening of the Furka Base Tunnel which allowed for an year round operation, since the decades before, the journey went through the Furka Summit Tunnel between Furka station and Muttbach-Belvédère ,which was part of the Furka-Oberalp(FO) line with trains running between Disentis and Brig.  As soon as snow started falling, everything above 1 metre had to be removed from the line to be "avalanche ready", which required a huge annual expenditure for this operation. This line was reopened in 2000 for the Furka Cogwheel Steam Railway , a heritage railway operating in the summer months.


BVZ, FO and RhB saw the opportunity to promote the Glacier Express as a tourist attraction and invested in new rolling stock. Today, the trains are composed by specially constructed panoramic cars to immerse passengers in the scenery, with announcements on the highlights along the journey. You can also use headphones to listen to everything about the route, with commentaries available in English, Chinese, French, German, Italian and Japanese.


On offer there is also a delicious menu prepared on board and served at your seat. If you are travelling in groups of more than ten people, reservations for lunch are compulsory. For less or individual passengers, reservations are recommended since menu availability is not guaranteed. You can book your menu at the Rhaetian Railway website

Starting from either Zermatt or St Moritz doesn't make a difference, since the journey is worth it to both eastbound or westbound. It is up to you to decide where to start or whatever is more convenient for you. In this article we will describe the journey starting from St Moritz.

The train enters the Albula line, which links the spa resort of St Moritz (1,774m/5,820ft altitude) to Thusis (697m/2,287ft altitude). In this part of the journey, which is 61,67 kilometers long, the train goes through 55 bridges and 39 tunnels making it one of the most spectacular narrow gauge railways in the world. Highlights of this line are the Solis viaduct, the Landwasser viaduct and the helical tunnels between Preda and Bergun stations.

The engineering masterpiece that was the construction of this line, is felt between these two villages with the many spirals that increase the track altitude in a short distance (400m/1,300ft for 5km/3mi). After reaching Filisur at the end of the Albula valley, the train passes on the Landwasser viaduct, one of the landmarks of this journey, continuing towards Thusis, reaching the Posterior Rhine and following to the city of Chur (585m/1,919ft)

From Chur, the train follows the course of the Rhine Gorge, Switzerland´s Grand Canyon between the village of Reichenau and the municipality of Ilanz/Glion and is only accessible by foot, bike or train. This area is a good place to go hiking, biking or canoeing and rafting with several trails and activities to choose from. If you wish to find more info about holidays around the area go to https://www.flims.com/en/experience-resort/nature/rhine-gorge

The final section of the journey goes into the Urserental valley passing the village of Hospental, then through the Furka Base Tunnel in the municipality of Realp, Canton of Uri to exit 15km ahead in the village of Oberwald, situated in the Canton of Valais. It was here that the old Glacier Express service used the old railway line which climbed the Furka Pass through the Furka Summit tunnel. Nowadays the Furka Base tunnel is also used to shuttle cars in the Furka car train.

From Oberwald, the train follows the Rhone Valley to Brig along the Rhone river and the scenery joined by the views of pretty villages and mountains makes for a winter fairytale or an inspiring Alps painting in the summer.

In Brig (678m/2,224ft), it is the start of the Brig-Visp-Zermatt Bahn (BVZ) which goes through the Mattertal valley until Zermatt.

Brig is the end of the Simplon Pass and a connection point for trains going to/from Milan and Italy. The journey continues to Visp (651m/2,136ft), then it enters the Mattertal valley and starts ascending, passing through the villages of Stalden (799m/2,621ft), St Niklaus (1,127m/3,698ft) and Randa (1,408m/4,619ft) before reaching Zermatt (1,616m/5,302ft) ending a spectacular 8 hour journey through some beautiful views along the swiss Alps. No matter if you travel in the winter or in the summer, you will have a great experience on board.

As of January 2017, Interrail and Eurail passes are valid to travel in the whole journey. GA Travel card, Swiss Travel pass an day passes are also valid but every passenger, including pass holders must pay a seat reservation in full to secure their seat in the train. You can buy tickets at https://shop.glacierexpress.ch/gex_en. Prices are shown below:

You can also eat on board, choosing between a three course lunch or the plate of the day:

St Moritz and Zermatt are close to two well known mountains, the Piz Bernina and the Matterhorn. Both municipalities offer plenty to do throughout the year with plenty of activities to choose from. You can also visit other villages or cities around like Andermatt, Flims, LAAX or Brig.

St Moritz is one of the most famous holiday destinations in the world. Lots of leisure and sporting activities like skiing, snowboarding in the winter and mountain biking, hiking or lake swimming in the summer to choose from. Rest in one of the grand hotels and delight yourself in a star-rated restaurant. Find more info at https://www.stmoritz.ch/en/

At the other end of the journey there is Zermatt. With the famous Matterhorn in sight, you can take the Gornergrat Bahn for an unique view of the mountain. Winter activities like skiing and snowboarding, sunbath at the Leisee Lake in the summer or photography points around are activities you can enjoy. For more info check https://www.zermatt.ch/en

Flims, located in the canton of Graubunden, is also in the region of the Rhine Gorge. Visit Sardona, a Unesco World Heritage where you can learn how the Alps were formed, do rafting or go around the Lake Caumasee on a E-bike that you can rent. For more info visit https://www.flims.com/en 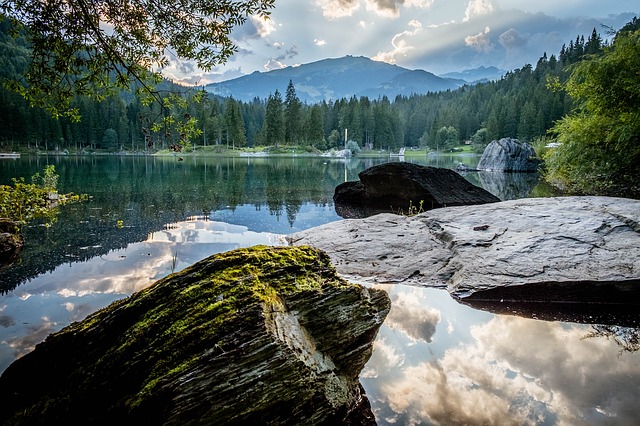 Davos is the highest city in Europe and with plenty to do up there. From Tobogganing (sledging), to fat bikes on the snow, museums, art galleries and nightlife it is a place not to be missed if you take the Glacier Express. Catch theGlacier Express Bus to connect to the slowest express train in the world. More info at https://www.davos.ch/en/

The links above concerning each region or city, offer plenty of info for accomodation but if you wish to search in other websites, visit www.booking.com or www.hotels.com.